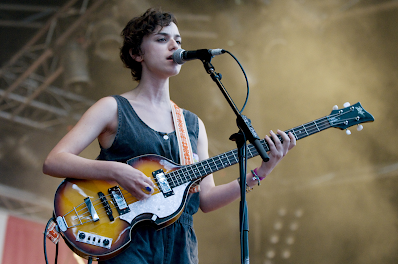 1 Future Islands (US) Listening to Future Islands is like stepping into a time machine. Their sound is awash in clean synths, pulsing, dancefloor-ready bass lines, and understated beats that wouldn't sound out of place on your favorite 1980s-era mixtape. Adding to this is perhaps the band's most recognizable sound: the vocals of Samuel T. Herring. The charismatic singer approaches the songs with a mixture of Bryan Ferry's romantic croon, Morrissey's unabashed emotional idiosyncrasies, and a seemingly out-of-place growl that allows him to place his unique stamp on everything.  New abum: As long as you are. PopMatters

2 Deradoorian (US)Angel Deradoorian (born July 18, 1986), also known mononymously as Deradoorian, is a musician based in Los Angeles, California. She is best known for her work with Dirty Projectors as full-time member from 2007 to 2012. She left to pursue a solo career.  New album: Find the sun  Wikipedia

3 Angus Gill & Seasons Of Change   (AU)  “Angus Gill is a brilliant young singer/songwriter and if you want to be thoroughly entertained, you’ll go and see his show” – Ray Hadley OAM.

“The New Old Me’ rocks and rolls with a steady, intense energy. Great vibe, great playing and a witty lyric that works on a few levels. On high rotation around here!” – Brian Nankervis.

“The New Old Me is a swaggering blast of a bygone whirl of bluesy Country that possesses a road-house rhythm snap. Call it Australiacana, or whatever you may will but Gill aged voice reminds listeners of young oldsters like Colter Wall and Cody Jinks.” – Glide Magazine.

4 Tim Koh ( US) Tim Koh is an American multi-instrumentalist, composer and visual artist, most notably known as a long time member of the band Ariel Pink's Haunted Graffiti. His unique bass playing and musicianship has been recognised by many as being an influence. Wikipedia

6 Avatar (SWE) How Swedish metal heroes Avatar made their darkest, angriest albums yet – and roped in Corey Taylor for the year’s most unlikely cameo. Avatar frontman Johannes Eckerström knew exactly what he wanted his band’s eighth album, Hunter Gatherer, to be from the start. “We got our Manowar album out of our system with Avatar Country,” he says of Hunter Gatherer’s 2017 OTT predecessor. “With this one, we wanted to make an aesthetic statement: something darker, something heavier, something more aggressive.” Hammer

7 Dawes (US) Dawes’ ‘Good Luck With Whatever’ Is Another Lucky Strike for One of Rock’s Best On Dawes' terrific seventh album, Taylor Goldsmith gently wrestles with post-marital maturity and rock's Peter Pan spirit, in recordings that veer back toward the band's live spark.  Variety

8 Lykke Li (SWE) Today, the great Swedish pop dramatist Lykke Li has come out with a new single called “BRON.” It’s the first Swedish-language single that she’s ever released. (“Bron” is Swedish for “bridge” or “source.”)  “BRON” is Lykke Li’s first proper single in a while, though she released a cover of the Gloria Gaynor disco classic “I Will Survive” last month. Right now, she’s woking on a new album that she’s planning to release next year. Stereogum

9 The Immediate Family (US) is the new supergroup formed by members of crack LA sessioneers The Section and friends. Between them, Danny Kortchmar, Waddy Wachtel, Russ Kunkel, Leland Sklar and Steve Postell have racked up thousands on credits on hit albums by the likes of James Taylor, Carole King, Linda Ronstadt, Bob Dylan, Stevie Nicks, Keith Richards, David Crosby, Warren Zevon and many more.  UNCUT

10 Katatonia (SWE) When was the last time you listened to a whole album, in one sitting, with all your focus and attention? When was the last time you felt the music and lyrics running through your veins and felt completely wrapped up in it? When was the last time an album gave you goosebumps and filled your whole musical being? If you haven’t done any of this in a while, City Burials is your album to invest your soul into. It is a beautiful composition of some of the best Katatonia has to offer, and also, in my opinion, music as a whole. As a long time fan, I was more than pleased with the direction they went. Metal Nation